Home » Psychics Articles » The Symbolism and Meaning of Spiders in Dreams

The Symbolism and Meaning of Spiders in Dreams 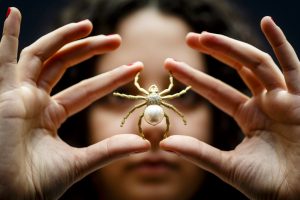 Spiders populate the mythology of many cultures, ranging from ancient Babylon, Egypt, and Greece, to modern Native Americans. Spider webs are the ultimate dreamcatchers, which originated in the Ojibwa Chippewa tribe. In fact, the Ojibwe word for dreamcatcher literally means “spider.”

Spiders’ meanings in dreams are many and varied. It’s important to examine a dream subject’s mythology to grasp what a dream may be trying to communicate. It’s also necessary to learn the symbolism of dream language to accurately interpret the meaning of a dream. But when interpreting a dream about spiders, the most important things are the dreamer’s own spider associations and personal spider mythology.

In other words, a spider’s symbolism in a dream depends on the dreamer. If the dreamer reviles and fears spiders, then the meaning of a spider dream will most likely be found in spiders’ negative symbolism. However, if the dreamer wonders and marvels over spiders, then positive spider symbolism should be explored to unravel the mystery of the spider dream. So, your personal feelings about spiders in general, along with how you feel specifically about the spider in your dream will help lead you to an accurate interpretation.

Here are six common things that spiders symbolize in dreams:

Spider webs are creative constructs. A web-weaver is a storyteller. Like a story’s plot, a spider web requires both a big-picture, birds-eye-view in tandem with attention to microscopic detail.  Your dream may be about something you’re building, a creative project you’re working on, or an idea you’re trying to manifest.

Spiders weave their intricate webs to capture prey. They perch on the web so they can feel the slightest tug or tremor that indicates the presence of a meal. Webs are delicate, but they’re also extremely strong and sticky. They’re nearly invisible, but they’re also deadly. Their purpose is to capture and immobilize. What webs are in your life? Has somebody woven an invisible web to ensnare you?

Spiders tightly wrap their victims in silky web strands and inject them with immobilizing venom. Spider webs, therefore, represent fate, traps, responsibilities, obstacles, barriers, or other negative aspects in your life that are twisted and woven together. You may feel as though a sinister outside entity is holding you hostage or heading your way, and no opposition on your part will set you free.

Often, spiders symbolize feminine energy. Spiders weave silky traps that double as domiciles. They carefully weave, they quietly watch, they patiently wait. They pack quite a bit of cunning and power into their tiny bodies. The spider in your dream may symbolize a woman in your life in disguise. This woman could be your mother, a girlfriend, or a powerful and possibly frightening female entity.

Spiders are so pervasive that you’re always within a few feet of one, but since they linger silently out of sight in the corners, we usually don’t see them or notice them. They work constantly to rid our homes of invasive insects, yet they remain largely unappreciated and invisible. The spider in your dream may represent your feeling like an unwelcome guest or an outsider in your life?

If you fear spiders, then a spider in your dreams may be a representation of the things you’re afraid of. On the other hand, if you like spiders, then a dream spider could symbolize a friend.

At their worst, spiders represent evil, cruelty, captivity, and cunning, so spider dreams can symbolize general anxiety. For example, you may have the sense that an unknown entity is lying in wait for the moment you misstep, so it can pounce on you as prey in its trap.

The role of spiders in mythology is somewhat mixed. But it’s still helpful to consider these mythologies as you attempt to interpret what your dream means. Mythology helps interpret what a spider’s appearance in a dream generally means. And if you have genuine arachnophobia, these mythologies’ insights may also help you track down the specific origin of that phobia.

Here are three interpretations of the meanings of specific types of spider dreams.

Spiders move by feel, not by sight, so the very thought of all those creepy, hairy little legs crawling on you makes you cringe. Is there something in your life that seems harmless and insignificant, but nonetheless provokes a primeval reaction? Or is it just an irritating, annoying detail in your life that’s gently tickling you to get you to pay attention?

If you come across a multitude of spiders in your dream, figuring out what they want and what they’re doing can help you interpret it. Are they watching you with fear, interest, or predatory intent? Do they seem to be waiting for something? If so, what? They may represent the things you need to deal with or clean up in your life, either physically or mentally.

If you’re having frequent dreams involving spiders, you should consider checking your psyche to see if there are spider-like activities going on there. Start by listing the things that spiders represent. Then honestly and deliberately scrutinize yourself to see if you’re exhibiting any of those attributes.

This process may be painful, but if you’re revolted by spiders and what they represent, their presence in your psyche should motivate you to face their presence and clear them out. Ignorance won’t abolish them. It can only blind you to a reality that will only become more powerful if you deny it.

Connecting with a Loved One on the Other Side